As part of my gratitude practice, I try to be thankful for the things that I don’t have, in addition to those that I do. For example, for the last several weeks, we’ve been racing to get the rest of our deck finished in time for my 13-year-old granddaughter Brenna’s coming-of-age party.  Although the party itself was fun, I felt underwhelmed about how the ceremony turned out and, frankly, was feeling down about it.

Then I remembered the six-foot ball I bought for the kids to play with at the party.

Brenna, along with a few of her friends, had come over early the day of the party to help set up. I put two of her friends in charge of blowing up the six-foot ball (with help from an electric inflator; I’m not that evil).  Once it was filled, it was magnificent! Brenna, her friends, and the rest of my granddaughters  immediately chased after it, pushing it around the yard and squealing with laughter. Then Brenna got a running start, belly-flopped on the ball and tumbled with it as it rolled forward down the hill.  I screamed, “Brenna, no!” picturing her lying on the ground with a broken neck, paralyzed.

As if by a miracle, she emerged from behind the ball, laughing and running just fine on her two legs.  Maybe my imagination is wild (yes) or I’m overprotective (again, yes), but she essentially fell from six feet onto hard ground, head first. I seriously don’t understand how she didn’t get hurt. At any rate, after exhaling, I dutifully scolded her, thinking again that this party was going to be the death of me. 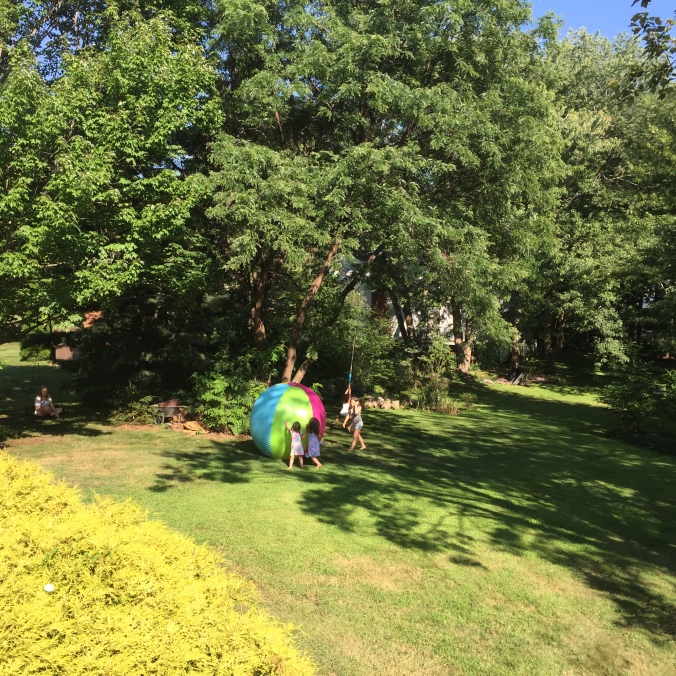 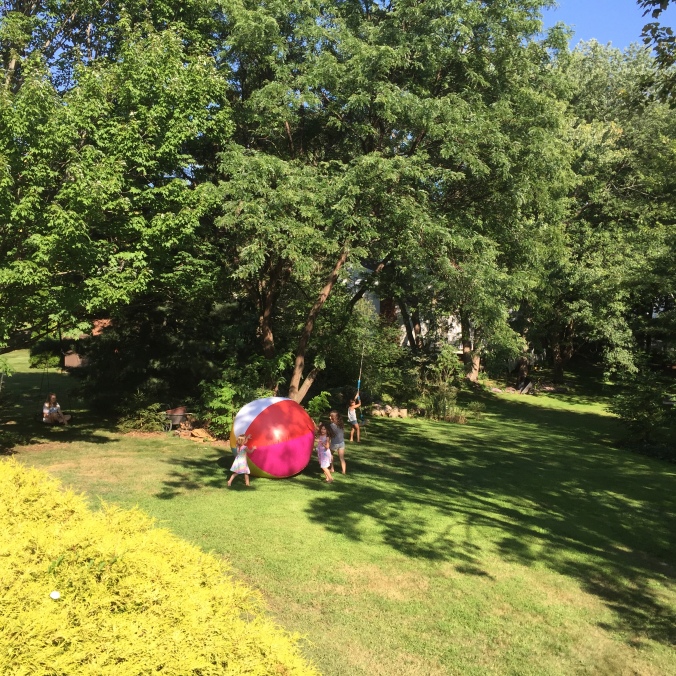 After the party, when I was feeling blue about the ceremony, I remembered the six-foot ball incident and what the day could have been like, and I thanked the universe for making it so. Yes, I’ll take a crappy event any day over having one of my granddaughters — or any child — irreparably injured, another reason why we’ve been mindful about the way we’ve built our deck.  Brilliant segue, yes?

After we reskinned rebuilt our middle deck and built a lower deck to accommodate  the slide and ladder, we really needed to focus on building the stairway. Instead of using stair stringers, my over-achieving beloved built the stairs completely by hand, which required way too much math and an overabundance of aggravation, given that the stairway runs downhill. But, naturally, he did it. 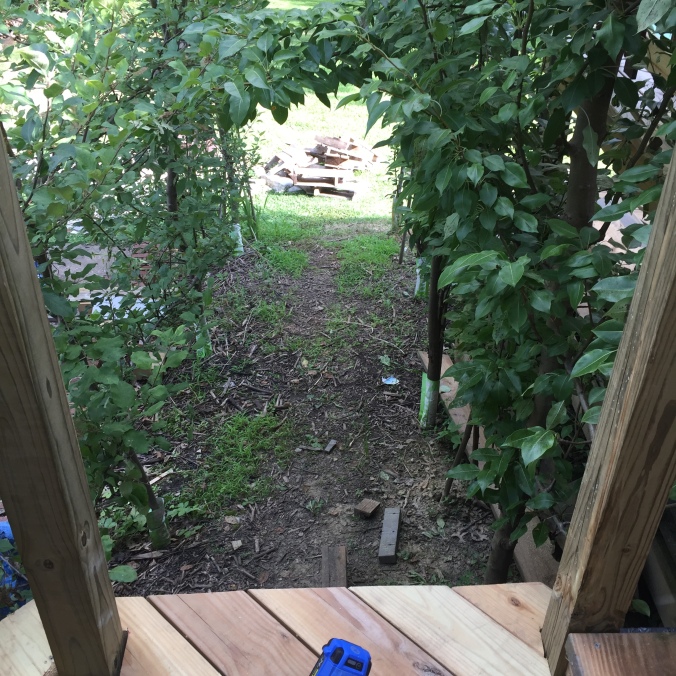 Edge of deck where the stairway needed to be installed. 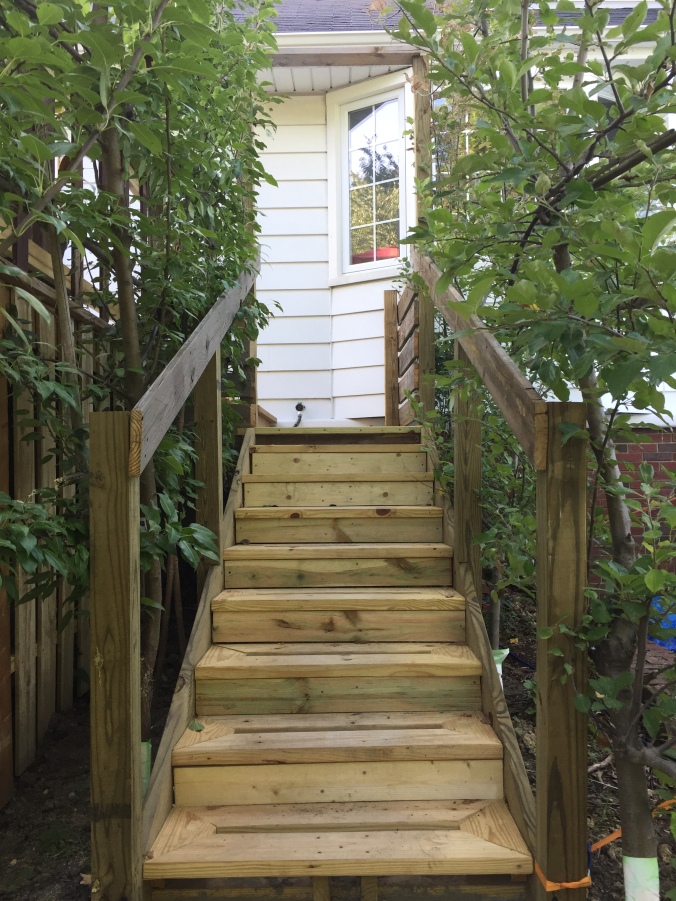 Yay for stairs! The railings are temporary until we decide on our pattern.

Once he built the stairway frame, using a rise of about five inches to better accommodate little legs, he wanted decorate treads, so rather than opting for plain ol’ two-by-six treads, he built modified picture-frame treads, relying on some great YouTube videos for guidance, such as this one from Cottage Life. 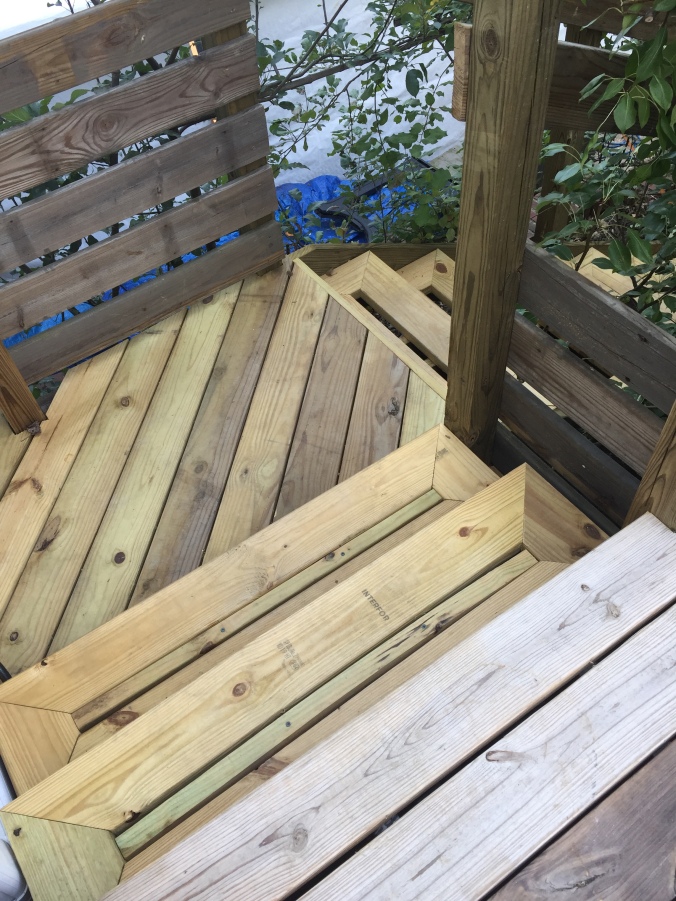 Arkady modified the design by creating a bigger gap in between the two-by-six boards and then filling it with a two-by-two strip, still allowing for a gap so that water can run through. Pretty nice!

These two steps run from the main deck to the landing, which connects to the stairway going down the hill.

He hasn’t yet filled in the middle of the treads going down the stairway; I believe that’s called “We Ran Out of Time” or “Phase Two.” 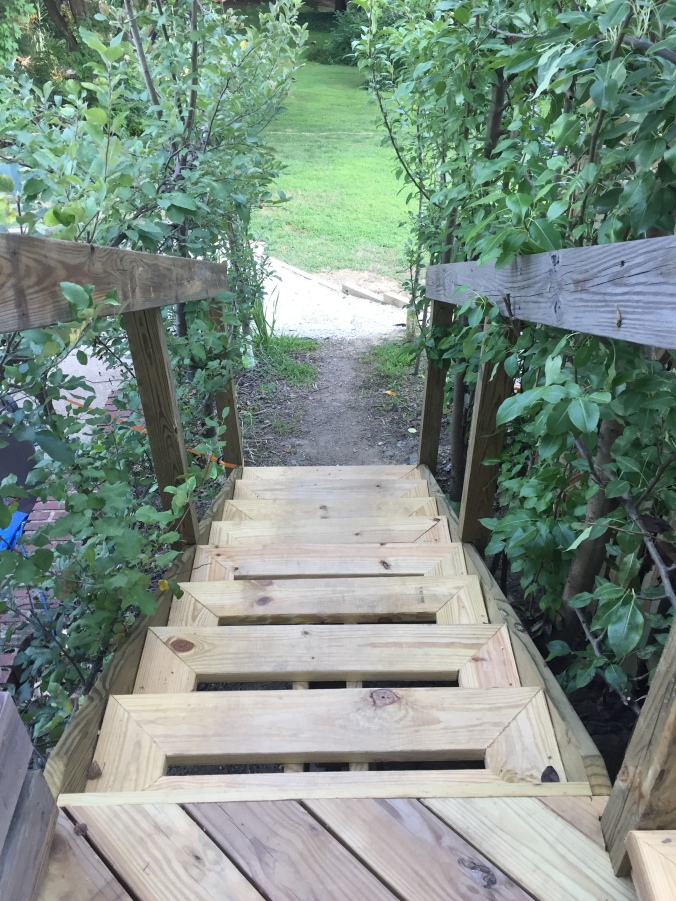 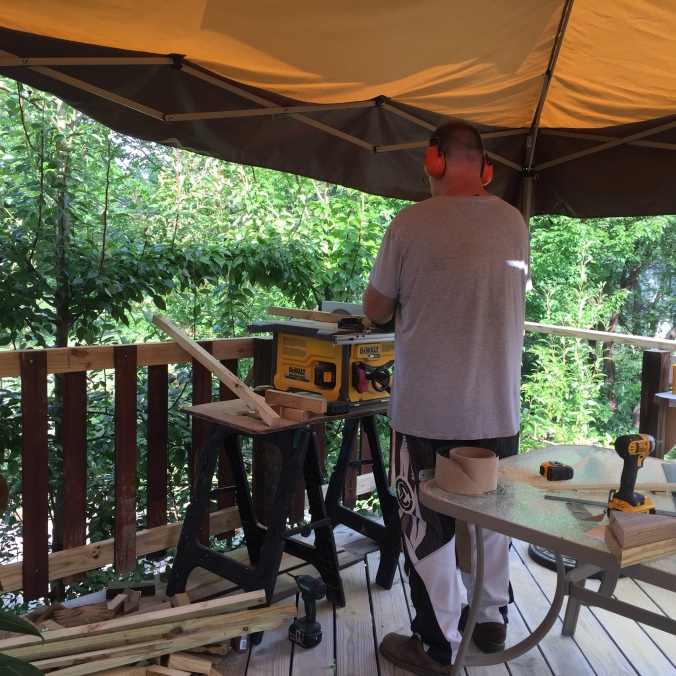 Hard at work, wearing solid shoes and ear protection. He must have sensed I was lurking about.

No matter how hard he’s working, he’s always smiling. Well, except when he got stung on the ear by a hornet, and I offered him a cut onion to reduce the pain. He scowled mightily at that home remedy.

The main to middle deck, before its step was built. 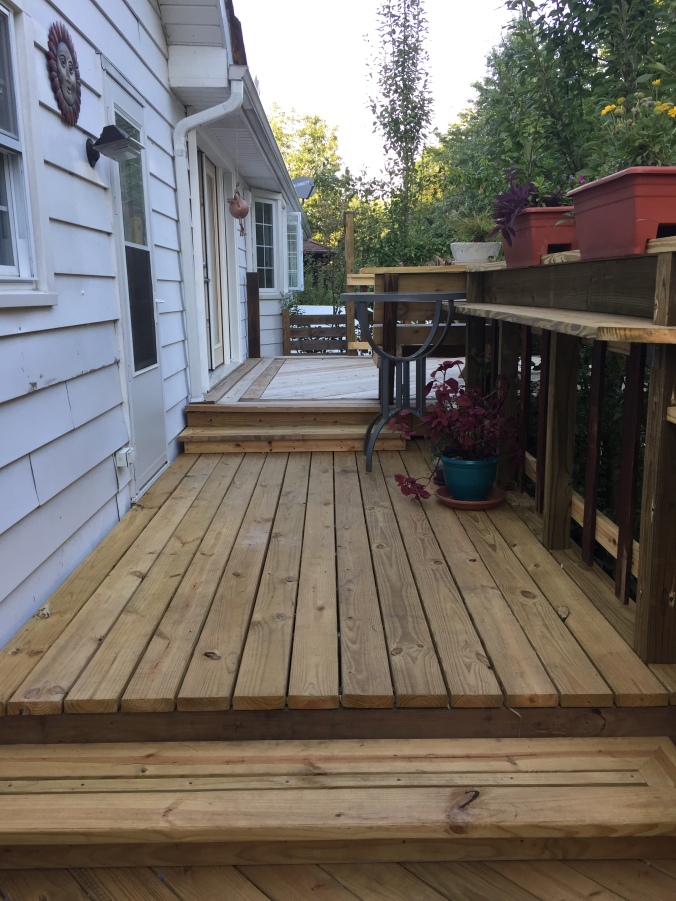 Here you can see the steps from the main to middle deck, and middle to lower deck.

For all intents and purposes, we’re finished with the deck for this year. Stay tuned for a final deck reno post that shows the slide, which, by the way, I tried out the day before the party only to discover that my bum barely fits on it. Come to think of it, maybe it wasn’t the ceremony at all that had me feeling so blue….

2 thoughts on “Deck reno, part 3: Picture-frame stair treads and gratitude for something I didn’t get”