When I was a kid, during those freewheeling ’70s, our family — mom, dad and younger brother — would spend at least one summer day at a local amusement park, called Geauga Lake.  The park began as a quaint picnic spot and swimming hole in the late 1800s and slowly grew into a full-fledged amusement park. In its later years, Geauga Lake changed hands several times, and its future appeared uncertain, until it closed, sadly, a decade ago.

Going to Geauga Lake was a treat, the highlight of the summer. My favorite rides weren’t the roller coasters (though I liked them well enough), but rather the antique motorcars, Ferris wheel at night and, always, the carousel and its old-timey organ music. I loved the history of the park and imagined myself there at the turn of the century, flitting about in a lavish skirt, frilly blouse and Gibson-girl hairdo.

Geauga Lake was relatively close, about a 45-minute trip from our house, so we could decide spontaneously to spend the day there, which is precisely what happened one summer morning when I was about 8. I recall that my brother, who was about 5 at the time, and I were playing outside (as usual) when Mom called us to get ready because we were going to … Geauga Lake! Woo hoo! While Mom packed a picnic basket — way too expensive to buy food at the park — my brother and I packed ourselves into the family sedan, a goldenrod Pontiac Catalina.

It was family tradition to keep a keen eye out for the rides as we got closer to the park, because the first one to call out, “I see the rides! I see the rides!” could claim bragging rights. I was at a disadvantage because I was nearsighted and rarely wore my glasses. (I preferred to be unencumbered by some plastic gadget pressing against my ears and nose, and rarely wear my glasses to this day.) But I didn’t mind giving my brother the thrill of being the first to see the rides. It made up for the time I pushed him into a river. OK, definitely not, but that’s a story for a different day.

Once we got to Geauga Lake, my brother and I hurtled ourselves out of the car, eager to begin our great adventure.  Then my mother took a long, hard look at me.

“Where are your shoes?” she asked.

“Tell me your shoes are in the car,” she said, sounding only somewhat hopeful.

“Shoes?” I asked, as if the concept of footwear was completely foreign.

Both of her hands quickly found their way to her hips. “Did you leave your shoes at home?” She was beginning to sound angry.

I looked down at my bare feet, dirty from playing outside all morning and so calloused that I could have walked across a cheese grater without flinching.

“You can’t go into Geauga Lake barefoot!” she yelled. She was pissed.

“I guess I forgot to put them on,” I said, which came as no surprise to anyone since I never wore shoes, at least in the spring, summer and fall. During summer breaks, I left the house early and didn’t come back until dusk, shoeless the entire time. I consistently disregarded signs that read “No shirt, no shoes, no service,” figuring that one out of two was enough. Once, I tracked blood all over my friend’s kitchen floor. We couldn’t figure out where the blood was coming from until she commanded, “Look at the bottom of your feet.” She knew me well. Sure enough, a chunk of glass had penetrated the leathery bottom of my foot. “Ew,” I said, wondering if I would need stitches and impressed that I hadn’t felt a thing.

I can’t remember if we returned home to fetch my shoes or if we stopped at a nearby store to pick up some sandals, but I recall that we did spend the day at Geauga Lake, my dad, happy to be outside in the sun; my brother, giddy to master the kiddie rides; my mom, relieved that my quirkiness didn’t ruin the entire day; and I, tolerant of the contraptions constraining my feet as I ran wildly from ride to ride.

And then, much, much later, that young girl fell in love with shoes, and, on a recent trip to Minnesota, discovered these beauties, L’Artiste by Spring Step, at O&B Shoes: 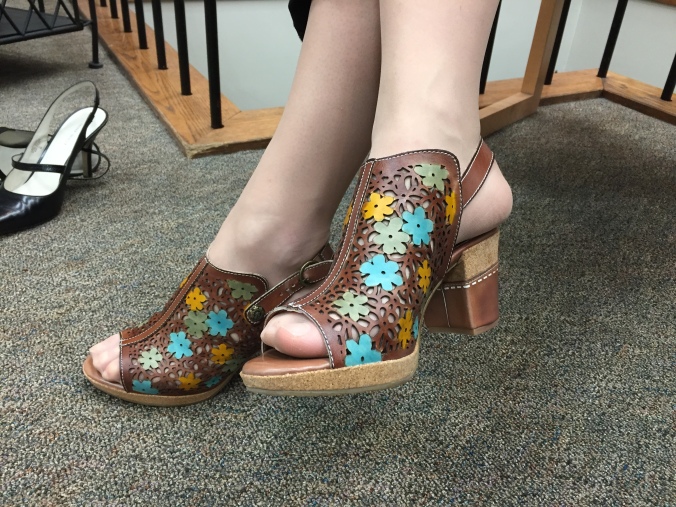 I snagged these immediately. Not only were they 15 percent off,
but there’s no sales tax on shoes and clothing in Minnesota. Score!

Aren’t these too lovely?!

I really wanted these because of the unique colors, which is exactly why I didn’t buy them. Not sure I have a thing to match them.

I could barely resist the cutout flowers! 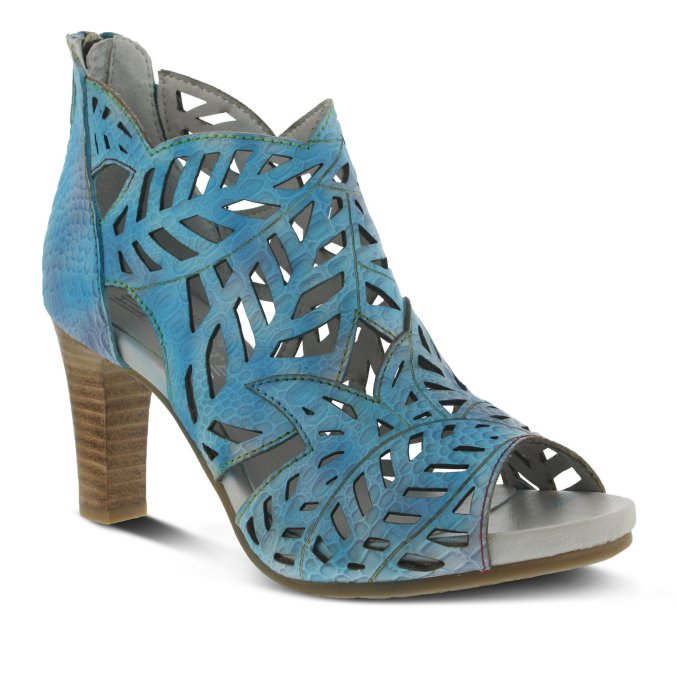 Probably a good thing O&B Shoes didn’t have these in stock.
My wallet would’ve been $100 lighter!

Friends, do you have a favorite among these? Or a great shoe (or shoeless) story? Let us know in the comment section!

4 thoughts on “And then she fell in love with shoes”