I was under the foolish impression that raising our deck about three feet to meet the patio doors we installed in our dining room would be a cake walk, especially because we were going to use the existing support structure. Well, I reckon it would have been except we got all fancy, adding two rows of storage below the deck, installing the field of the deck on the diagonal, and adding perimeter boards treated with a  technique called Shou Sugi Ban, and we needed to get the deck done ( done enough, that is) to host our Fourth of July family picnic. Tall order!

Just before midnight on July 3, I told my beloved that we needed to cut the sawing and drilling (no, we weren’t done yet). Our neighbors are pretty tolerant of our DIY selves, but everyone has their limit.  So we agreed to rise early on July 4, the day of our picnic (folks were coming at 11 a.m.), and finish the deck. What was still undone? Oh, seats and railings. No biggie.

Here’s how the built-in seats looked on July 3 (a little sparse and damn uncomfortable — even with the cushion): 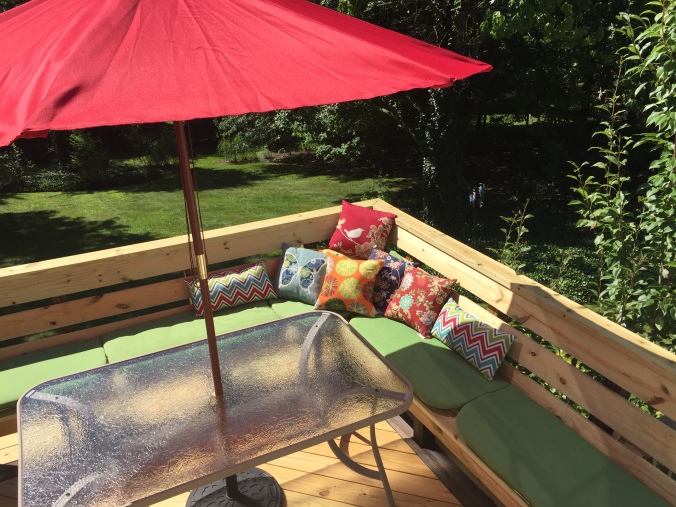 This entire madness started because there was no elegant way for us to access our deck. From the inside of the house, it was accessible only through the back door, adjacent to our laundry room and half bath. What would have made sense were patio doors off the dining room, which would have allowed us to walk right onto the deck.  Instead, from the dining room you could look out the large picture window onto the deck. So after months of hemming and hawing, we decided to tear out the picture window and install French patio doors with sidelights. Unfortunately, to use the doors without serious injury, we needed to raise the deck a good three feet.

Truth is, the deck was in shabby, shabby shape. The boards were curling and popping, and the upper-level deck, which you can see in the photo above (and is now the lower-level deck), actually slopes toward, instead of away from, the house.

After we stripped the deck boards, we decided to make the underside of the deck usable by creating essentially two long shelves, which we’ll use to store things like planters and wheelbarrows. We left the center open so that we could easily walk (er, crouch) in and out.

In case you’re wondering, the plant in the photo is a hibiscus. It is not marijuana. Its stunning red blooms are as large as softballs and give the backyard glorious color. #Ihaveproof.

We kept most of the same joists though we flipped them and covered the entire underlying structure with joist tape to add a protective barrier against water.  The seating posts you see in the photo below look charred because they are.  My beloved used a centuries-old Japanese technique called Shou Sugi Ban, which not only looks spectacular, but also helps preserve the wood.

He used the same Shou Sugi Ban technique on one row of the perimeter boards to mimic the design of our dining room floor.

In the perimeter board closest to the house, you can see three vertical cuts in the wood. We added those as tiny water drains to help keep rain away from the house. We did not invent this. Not sure how effective they’ll be, but we thought they were cool.

Shou Sugi Ban has an interesting history. The technique, which involves charring the wood with open flames, was developed by the Japanese to help preserve wood against the elements and insects, even termites. Shou Sugi Ban fell out of favor but is now making a comeback, in Japan and around the world, particularly because this preservation technique is environmentally friendly.  Instead of using traditional open flames to char the wood, we used a special attachment to a propane tank. 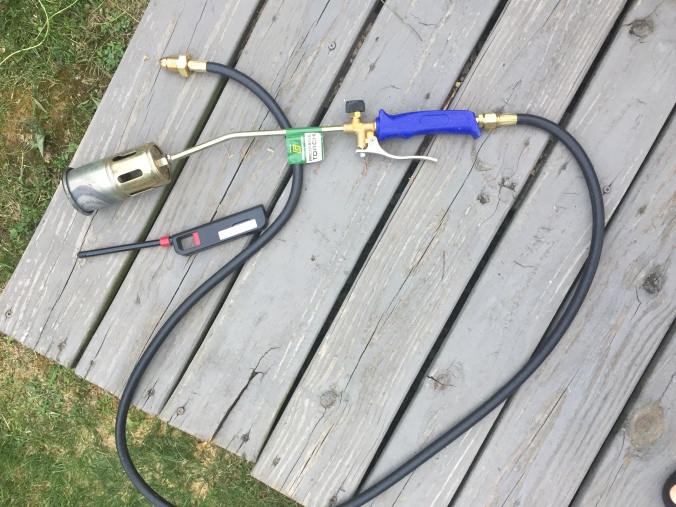 Once the field was laid, on the diagonal, we trimmed the ends and added the perimeter boards. Because the deck is relatively small — just 14 by 14  — we could use 16-foot boards for the center, obviating the need for any joints in the entire field. What you also won’t see on the field are screw holes, thanks to a nifty tool that positions the screws into the side of the deck boards so that they’re hidden. (Kudos to our neighbor Larry who came over to inspect our work and immediately asked why he didn’t see screw heads!) 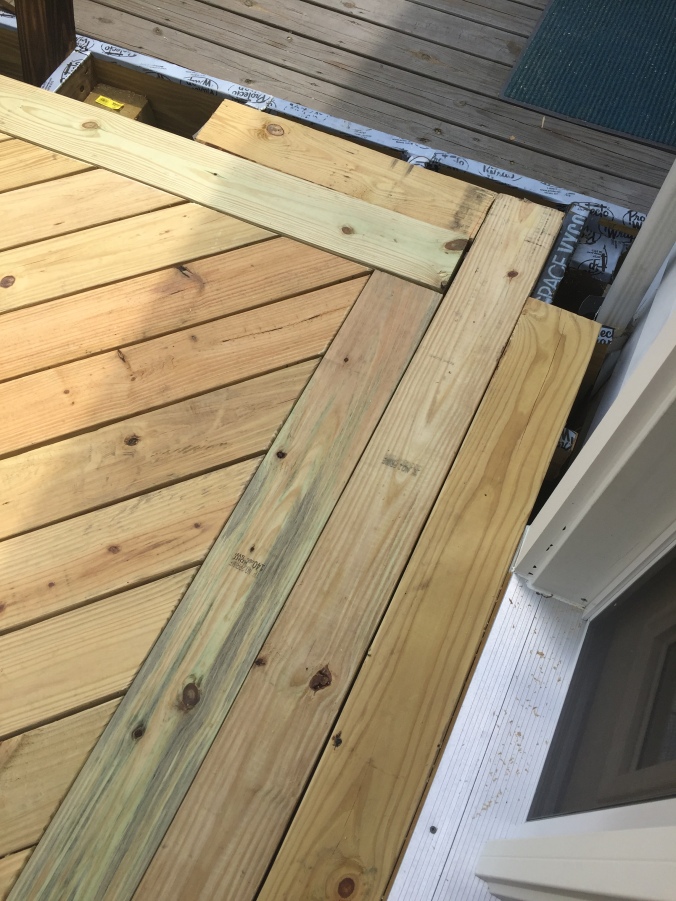 Here’s where things got a little tricky. To finish the deck enough for our party, we had to rail off the spot for the stairs, since we hadn’t built them yet. We tied the temporary railing into the end of the seating and added a little arm for, say, a wine glass. However, in rethinking the stairs issue since then, we decided to ditch the stairs (we have a flight on the now-lower level of the deck) and are going to build an outdoor butler pantry in that space. Handy! We even have a piece of granite that’s the right size for our outdoor countertop. 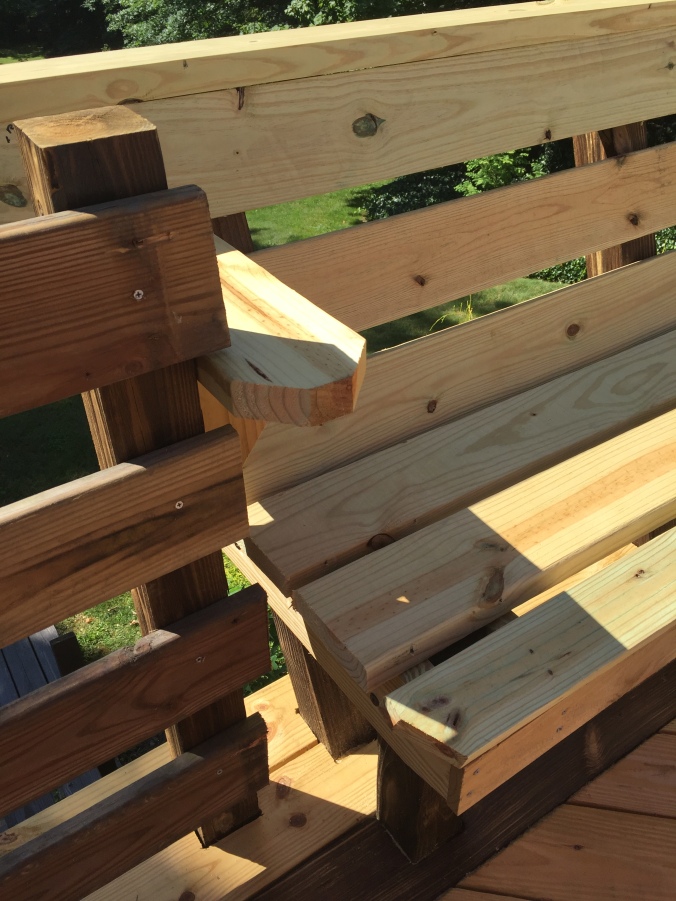 The seats tilt back, Adirondack style, and have front edges that tilt slightly downward, making them really comfortable. 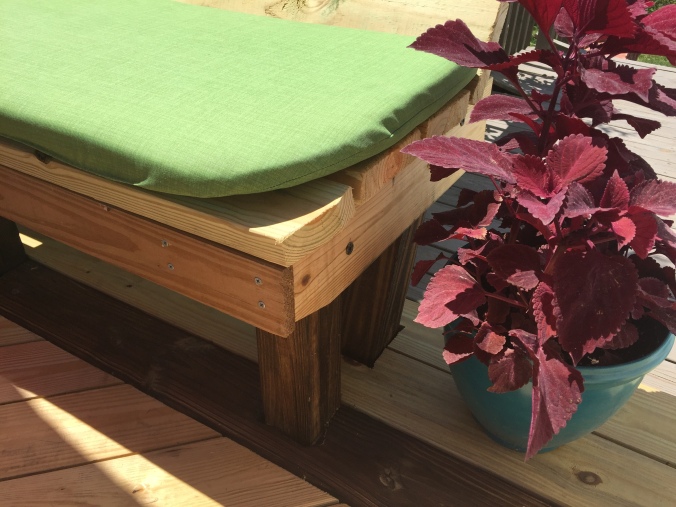 Although the rail in the back is temporary, assembled with our old, crappy deck boards, it actually doesn’t look half bad.

The corner of the seating took some skill and guesswork to create. The seats tilt back at a 17-degree angle and they meet at a 45-degree angle, which translates into a compound cut. Math was involved. It wasn’t pretty. Plus, we were working at near midnight, under spotlights, so it took more than a few (mis)cuts and adjustments to get the compound angles neat and tight. To our mind, the end result is dang good enough.

Despite its slight imperfection, the corner has become everyone’s favorite place to curl up.

We’re working on making our yard feel like a park, so we made this tree swing, which the kids (and I) love. 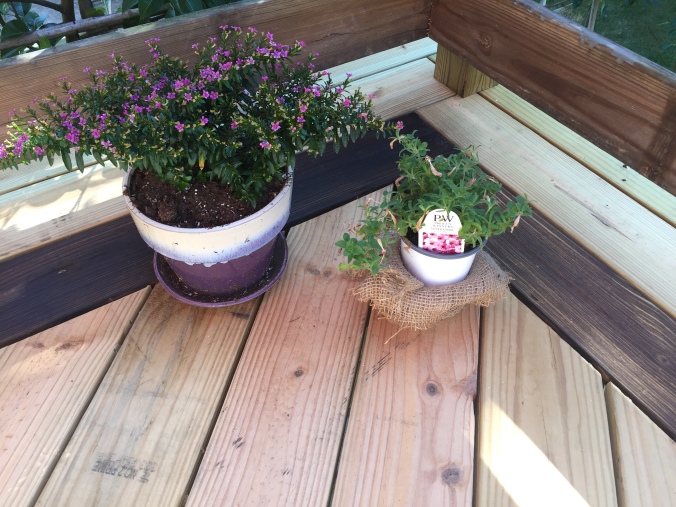 What’s next? Aside from building our outdoor butler pantry and finishing the railing, we have to renovate the lower deck, which you can see to the left of the new deck. Luckily it’s much smaller and we’ll run the deck boards straight — no fancy stuff there. Well, not entirely true. We bought a slide that we’re going to install so that the kids (and I) can slide down from the deck to the yard. 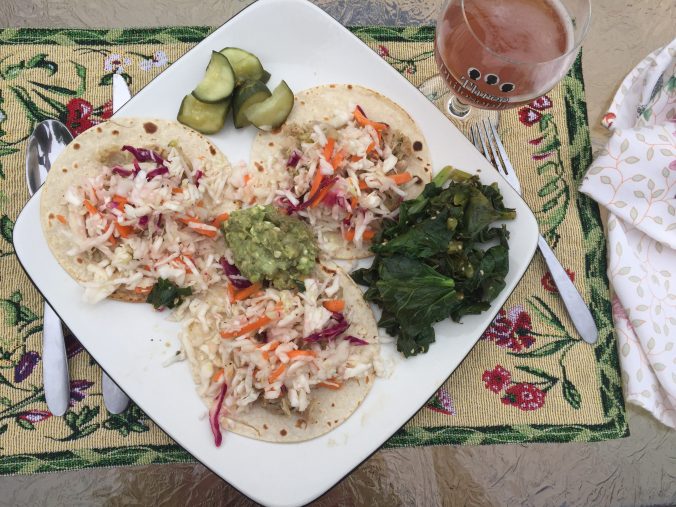 5 thoughts on “A hair-raising deck raising”