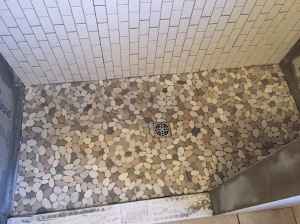 The bathroom/shower reno is coming to a close — and with flying colors! Days 4 through 8 consisted of tiling, grouting and adding a built-in (a last-minute decision) that we picked up from the Kraftmaid outlet in Warren, Ohio. And did we get lucky. If you’ve ever been to the Kraftmaid outlet, you know how insane it can be. Folks line up at the crack of dawn and get handed numbers so they can get early dibs on the best stuff. We typically get there mid-morning and take our chances. They’re open only a couple of Saturdays a month until about 12:30 p.m., and the turnover on the inventory is remarkable.

We envisioned buying a tallboy cabinet to use in the new storage space that divides the bedroom and bathroom. The space is tight, so we needed a cabinet 24 inches wide and 24 inches deep. We found a pleasant enough oak tallboy, but as nice as it was, it just didn’t “wow” us.  (We like to be “wowed.”) Then we spotted a base cabinet in sage that felt “beachy,” which is the design theme for the bedroom, and a complementary upper cabinet in “mushroom.” Both colors totally work with the new bathroom.

The only missing piece was a counter top, so we wandered over to the section where they keep wood divider panels. We got so lucky finding a base cabinet and  upper cabinet, we felt certain we would come up empty handed in the counter top department. Immediately we spotted a three-inch wide panel in “willow,” with a finished edge — the only one like it, I might add.  Bingo! Total cost = $133.

Anyway, back to the reno. Thanks to our contractor, Dan Djuric of 4 Star Homes & Construction, nearly all the tiling/grouting is complete. Check out the photos below for details, and, if you missed it, read the first installment of this series. 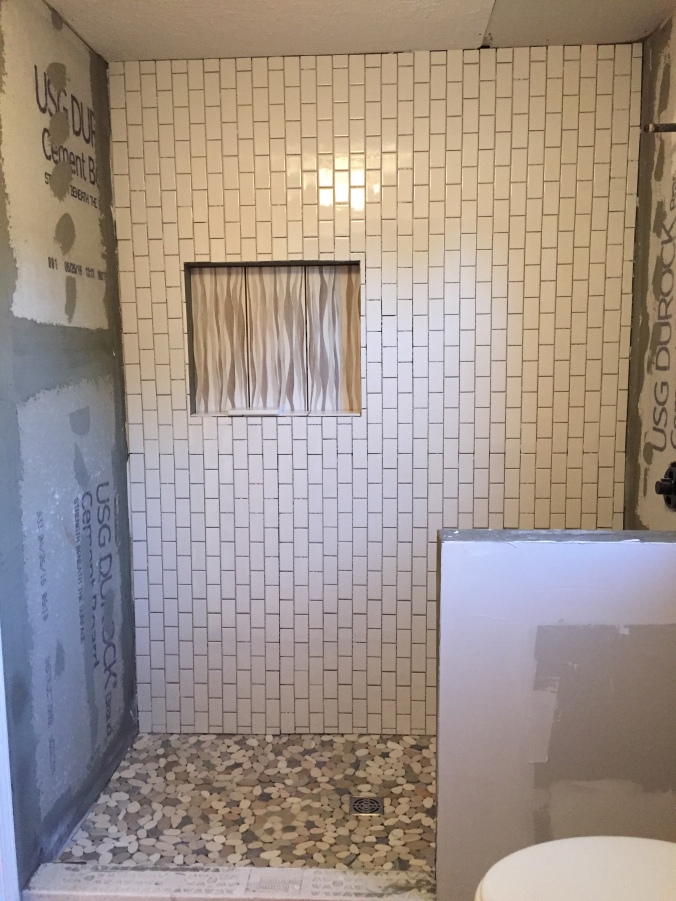 We asked Dan to install the subway tile in a vertical pattern, emphasizing falling water. 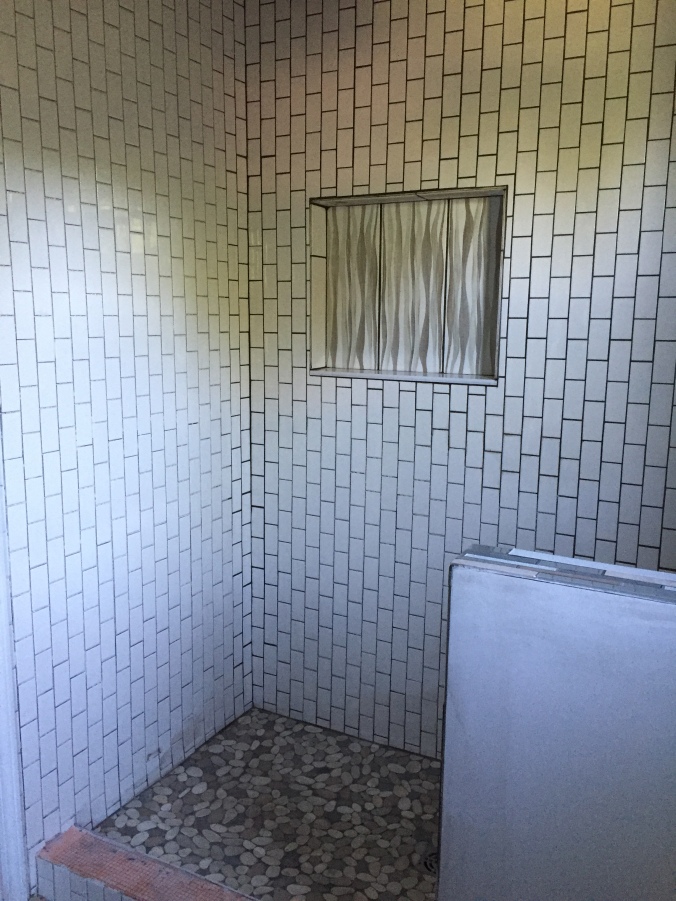 Two walls nearly finished! They’re only half-grouted in this photo. 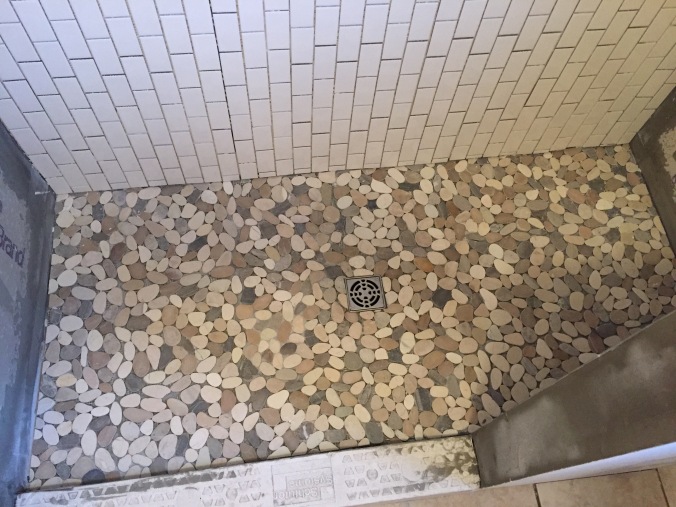 Love this floor! We chose sliced pebble flooring and a grey/tan grout (not shown) for the shower floor. They’re smooth, so they feel soft against your bare feet. Again, our idea is to bring the outdoors in. 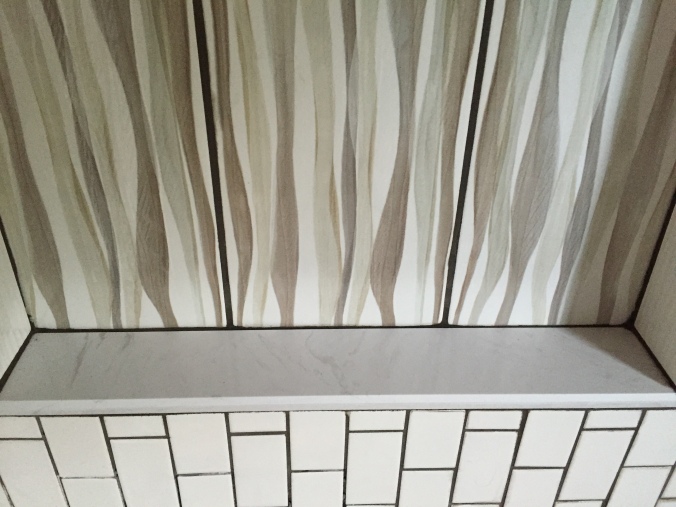 We bought two pieces of beveled edge marble to function as the shelves in the shower niches, designed to hold shampoo, shower gel, etc.  In addition to this niche, Dan created a second matching niche on the inside of the knee wall. 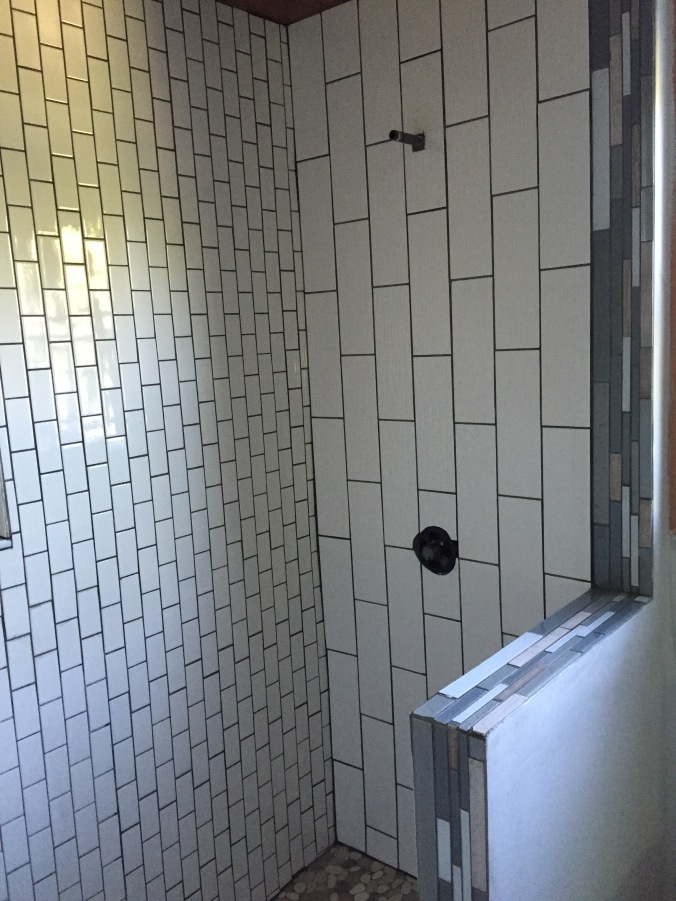 We used American Olean Urban Canvas Wave Gloss 4 x 12 ceramic tiles on the wet wall and Warm Winter Glass Stone Blends Mosaics (what a mouthful) along the wall and the top and side of the knee wall, again hung vertically to mimic falling water.

Close up of the Urban Canvas Wave Gloss ceramic tiles on the wet wall. The waves also mimic the Italian ceramic tile, aptly called Waves, we used in the niches. 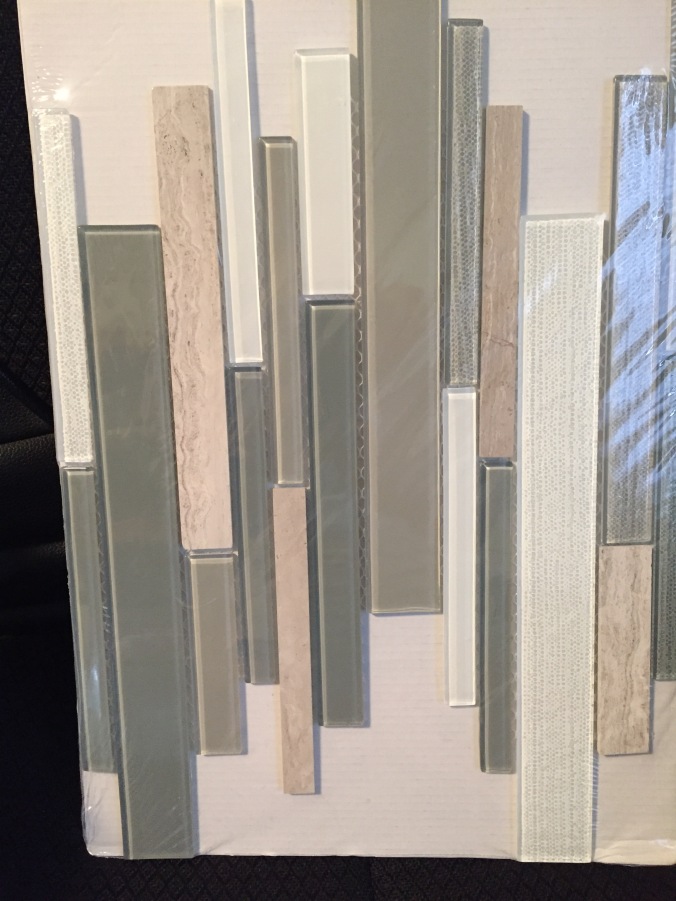 Close up of the Warm Winter Glass Stone Blends Mosaics, which “fall” from the ceiling and over and down the knee wall.

Finally, here’s a photo of the new built-ins. As you’re looking at the cabinets, the bathroom is to the right and the bedroom to the left. We used the same Waves ceramic tile on the wall that we used in the shower niches. The colors of the three Kraftmaid pieces (despite some off-color in these photos) perfectly complement the tile. 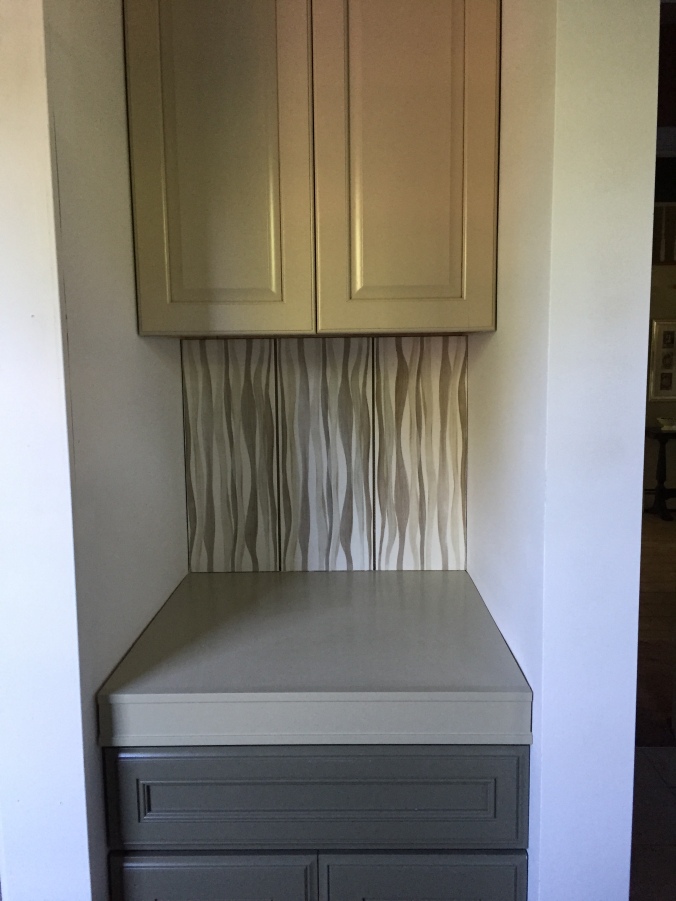 We purchased an upper cabinet (in “mushroom”), countertop (in “willow”) and lower cabinet (in “sage”) from the Kraftmaid outlet in Warren, Ohio. We needed to trim the sides a wee bit to get a perfect fit into what was the former closet space between the bedroom and bathroom. 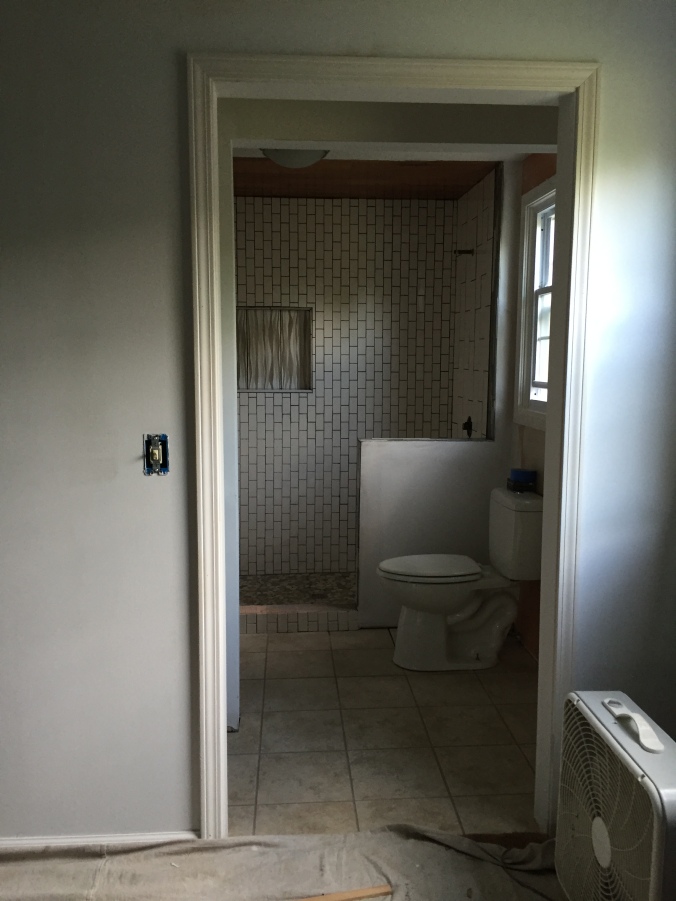 The doorway from the bedroom to the bathroom is now framed. Next: install the doors. Notice the new light switch to the left. Dan asked how Mom was going to turn on the bathroom light from this entryway. Good question! The electrician solved that problem by installing a three-way switch. 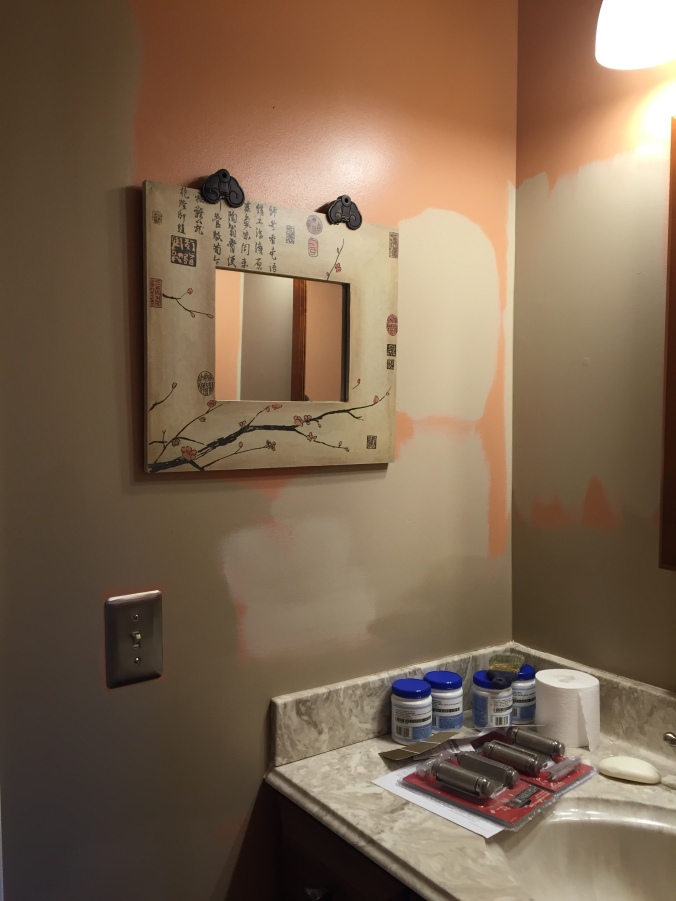 Paint sample time! From the left, what you see are Sherwin-Williams Latte, Kilim Beige and Nomadic Desert. We’re definitely going with Latte for the front of the bathroom (where the sink resides) and probably Kilim Beige, which is significantly lighter, for the back of the bathroom.

Stay tuned for the third and (I think) final installment of the bathroom/shower reno, including another last-minute surprise!

In the meantime, if you need a contractor you can depend on for a build or a remodel in the Cleveland area, send us an email at abbyandelle@gmail.com or leave a comment.