By Abby and Elle

In any case, we’re excited to tell you about a new line of clothing, with roots right here in Cleveland, called Georgie & Elaine. The line is the first for Factory 2.0, a Cleveland-based fashion designer incubator. Devin VanderMaas, the line’s creator, says she’s seeking a timeless, classic look with the clothing. She’s not interested in a look that gets tossed after the season is over. And she’s committed to bringing garment production back to Cleveland.

We got a peek at the spring/summer line recently at the Banyan Tree (double bonus, to our minds). 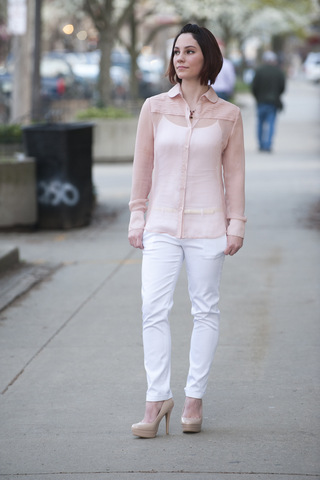 Shown in coral here, the Michelle blouse will be offered in plum and black in the fall. Photo: Stephen Travarca

The Michelle mini dress looks innocent enough from the front but features a fiesty open back. Photo: Stephen Travarca 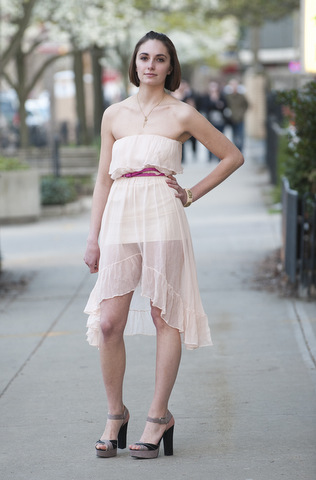 This asymmetrical dress is made from silk chiffon and can be paired with a belt or even leggings. Photo: Stephen Travarca 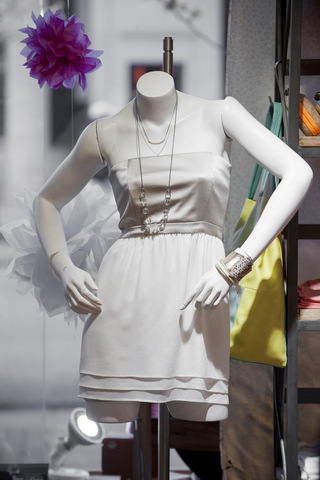 Currently, the clothing is only available through trunk shows. Photo: Stephen Travarca

Ione Fuzzell, a Kent State University fashion design graduate, helped design the spring/summer 2013 line. Although the clothing isn’t made in Cleveland (we actually used to have a robust garment industry around the turn of the last century), it is made in New York City. Ah, there’s something refreshing about that.

So, readers, what do you think about this new collection?

P.S. We’ll be doing some overseas travel soon and look forward to bringing you trend reports on what’s happening in Scandinavia so stay tuned! If you haven’t already, sign up for our automatic email updates — that way you won’t miss a thing.

One thought on “New Line of Clothing Launches in Cleveland”